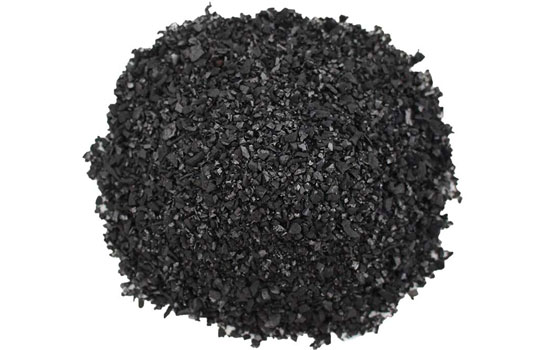 Steam activation is the most widely used process because it is generally used to activate both coconut shell and coal based carbons. Steam activated carbons are produced in a two-stage process. Firstly the raw material, in the form of lumps, pre-sized material is carbonized by heating it in an inert atmosphere such as flue gas, so that de-hydration and devolatilization of the carbon occur. Carbonization reduces the volatile content of the source material to fewer than 20%. A coke is produced which has pores that are either small or too restricted to be used as an adsorbent. The second stage is the activation stage which enlarges the pore structure, increases the internal surface area and makes it more accessible. The carbonized product is activated with steam at a temperature between 900°C and 1100°C. The chemical reaction between the carbon and steam takes place at the internal surface of the carbon, removing carbon from the pore walls and thereby enlarging the pores. The steam activation process allows the pore size to be readily altered and carbons can be produced to suit specific end-sues. Steam Activation produce activated carbon in the form of 1mm to 3mm pieces, which are crushed and screened to remove fines and dust to meet the specifications for granular activated carbons. To produce powdered activated carbons, the carbon pieces are further grinded using a gentle pulverizing action.

The activation process generates a network of minute openings of different diameters on the carbon surface which become the path for water to access the extended internal surface created by activation. Carbon has a natural affinity for organic pollutants which bind to its surface. Once activated, the carbon forms little pores and pockets that increase its surface area. An imbalance of forces then exists on the activated carbon atoms at the pore wall surface. To neutralize this imbalance, molecules are physically adsorbed, i.e., drawn and held physically to the pore wall (Van der Waals forces). In other words, compounds like pesticides, chloroform, and contaminants slide into the holes of this honeycomb-like substance and hold fast through a process called adsorption. The porosity of activated carbons offers a vast surface on which this adsorption can take place. Adsorption occurs in pores slightly larger than the molecules that are being adsorbed, which is why it is very important to match the molecule you are trying to adsorb with the pore size of the activated carbon.

Our activated carbon products are sourced from organic products such as coconut shell, coal, wood and so forth.

Coconut shell activated carbon, made from coconut husk, is a vapor-activated material. As this carbon contains no chemical agent, when utilized on a medium, it won’t contaminate or respond with it. It’s anything but an absolutely normal and harmless to the ecosystem item, that has a little carbon impression and can efficiently absorb impurities with micro-pore molecular structure, for example, those present in drinking water. Coconut shell activated carbon, owing to its high abrasion resistance and unique physical and chemical characteristics, can safely support applications such as the recovery of gold and other precious metals.

Coal based activated carbon originates from coal that has undergone a steam activation process.

Contaminants in Water and its Removal by Activated Carbon